Background: Idiopathic interstitial pneumonias (IIP) are associated with an increased lung cancer (LC) risk. However, data on the prognostic and therapeutic impact are limited. We therefore aimed to analyze the outcome of IIP patients with LC under different treatment modalities.

Conclusions: LC is a frequent comorbidity in IIP, with a higher incidence and reduced survival in IPF compared to other IIPs. LC treatment is associated with significant toxicity, specifically in IPF. Interdisciplinary evaluation of therapeutic options in IIP patients diagnosed with LC is therefore mandatory.

Download data is not yet available.
Abstract 291 | PDF Downloads 42 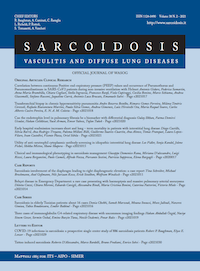