Introduction: Cement-based material containing asbestos was found in the water of a pond in the city of Milan, Italy, where recreational fishing activities take place. Some fishes are in ‘no-kill’ fishing areas, others are caught and consumed. Objective: To verify the presence of asbestos in water, sediments and some fish species living in the pond. To verify the presence of asbestos in fish feed and to test fish exposure by ingestion. Methods: Samples of water, sediments, fish feed and fish species have been collected and the presence of asbestos fibers has been ascertained in the different matrices. Results: No traces of asbestos were found in water. Instead, the asbestos content in sediments was beyond regulatory limits. Asbestos was detected also in benthic fish species, and in rainbow trout (Oncorhynchus mykiss) that does not reproduce in the pond but must be restocked periodically through aquaculture. In the meat of the grass carp (Ctenopharyngodon idella) 36,000,000 fibers/100 g of wet cloth have been found. Values up to 15,000,000 ff/100 g of wet cloth have been detected in the rainbow trout. Asbestos has also been found in animal feeds, in particular crocidolite fibers and asbestos tremolite bundles. Conclusions: Benthic fish species have likely been contaminated by their close contact with the polluted bottom of the pond. Instead, the presence of asbestos in the trout is probably linked to a previous contamination during farming, since this fish spend a brief period of time in the water of the pond. Asbestos distribution and concentration exclude a risk for public health; however, some values of asbestos found in fish meat deserve attention. Accordingly, precautionary indications have been given to the Municipality of Milan and to the fishermen association. A larger scale monitoring of water, food and animal feed is worth performing to better assess exposure by ingestion.

Download data is not yet available.
Abstract 185 | PDF Downloads 3 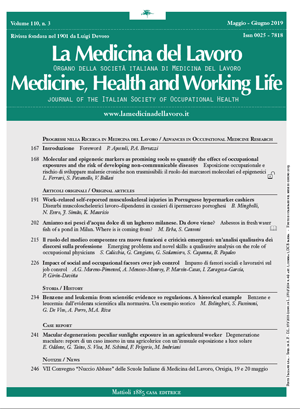 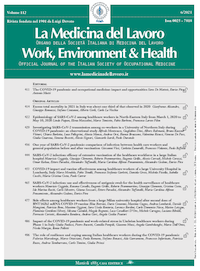 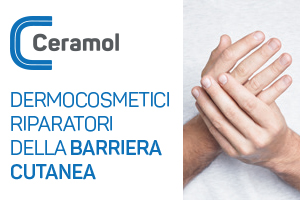